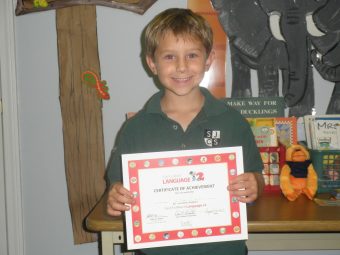 When my son first started the Mindspark Summer program, his attitude toward reading was very negative. He was 6 years old and had just finished Kindergarten. His resistance to reading was all about his confidence level. He struggled daily when it came to him believing that he could do it. He was also a late bloomer when it came to learning his sounds.

The transformation in his self-esteem over the summer was amazing. Little by little, he started to believe in himself.

Once he started to complete programs and reach his daily goals, you could see that he was starting to take pride in his accomplishment. He began to really enjoy going to the center. He would tell me about the stories he had read and how many points he earned. He was building his foundation for being a lifelong reader.

By the end of the program, his entire attitude had changed. He now believes he CAN read almost anything! He was transformed into a master decoder of words. He loves to read graphic novels and non-fiction texts. Mindspark gave my son the tools he needed to help his brain slow down long enough to be able to sit and really comprehend what he was reading.

Any cookies that may not be particularly necessary for the website to function and is used specifically to collect user personal data via analytics, ads, other embedded contents are termed as non-necessary cookies. It is mandatory to procure user consent prior to running these cookies on your website.

Advertisement cookies are used to provide visitors with relevant ads and marketing campaigns. These cookies track visitors across websites and collect information to provide customized ads.

Analytical cookies are used to understand how visitors interact with the website. These cookies help provide information on metrics the number of visitors, bounce rate, traffic source, etc.

Performance cookies are used to understand and analyze the key performance indexes of the website which helps in delivering a better user experience for the visitors.